The Tick is both blessed and cursed by TV.  Blessed because very few comics from such an obscure source would get not one, not two, but three tries at a series.  Cursed, because the first two attempts were both on Fox and had plenty of network interference/mismanagment.  The third try may just be the charm, though, as as Amazon has produced a new pilot for The Tick as part of their current ‘Pilot Season’.

The specifics behind The Tick vary from the various comic books and shows, but in general he is a dimwitted but nigh invulnerable superhero who ends up protecting a city named “The City” from various silly supervillains from a Man-Eating Cow, a million-billion ninjas, to the Terror – an elderly villain most famous for punching out Teddy Roosevelt. 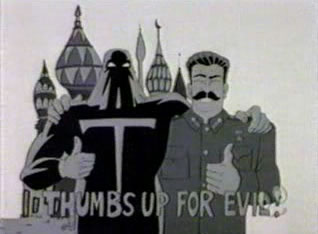 The new Amazon pilot focuses, at least to start, on Arthur.  Arthur is usually portrayed as the sidekick/straight man to The Tick but he’s the driving force here.  He’s had a terrible childhood – the non-Quinjet of the not-the-Avengers superteam the ‘Flag Five’ crashes on and kills Arthur’s dad, and young Arthur comes face to face with The Terror, who eats his ice cream (seriously).  An iconic, Time Magazine-ish photo is taken of the moment.  Fast forward to adult Arthur, and he’s obviously still suffering from that moment.  He’s obsessed with The Terror, who everyone else thinks is dead, but Arthur is convinced is still running the criminal underworld.  His investigations are what brings him into contact with The Tick.  They try to set up a “is The Tick even real?” question, but I think it’s pretty clear he is – but Arthur, with his mental illness isn’t sure he’s not imagining the whole thing while off his meds.

I won’t say the pilot is perfect, as the tone shifts suddenly, but Peter Serafinowicz is actually really good at delivering The Tick’s weird monologues and quips.  Griffin Newman has some real depth as Arthur, too.  I’d complain about the strange over-textured suit but I’m fairly certain that’s a parody of every recent Superman suit where the filmmakers can’t stop themselves from putting some wacky design on it.  I guess the best thing I can say after 30 minutes of the new series is, I want to see more.  If you do too, go to this link and vote.