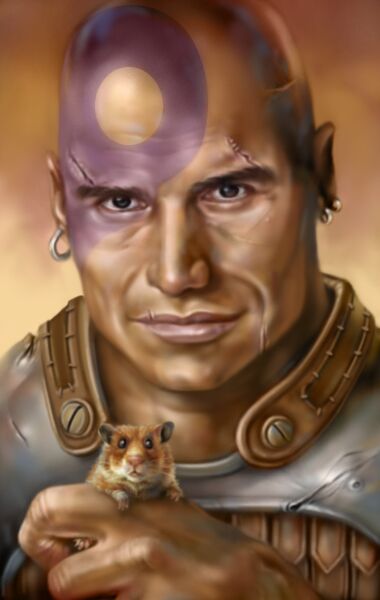 When I was younger, there was a certain class of gamer nerd that even I didn’t ‘get’.  They did their gaming with large sheets of paper and miniatures and a whole mess of dice.  The closest I’d ever gotten to that was a few books that had you roll dice to determine the outcome of battles (Choose Your Own Adventure style).  I mostly ignored this phenomenon, though, as you played mostly by talking, which my younger self didn’t exactly excel at in front of others.

Eventually, I became friends with some of those guys, and a couple even rented the apartment in our duplex.  I never did join them in their strange ‘Dungeons and Dragons’ games, but as they were avid PC gamers also, I encountered DnD via other means:  Baldur’s Gate.  If you’ve read these columns before you know I love RPGs, though most of my playing had been done on console to that point.  Since the game was so highly recommended, I gave it a try.

It wasn’t easy to wade into, no doubt, as your character customization had a dizzying array of options, from different races, classes, weapon skills, and the like.  You were joined along the way by up to 5 companions at a time (though more were available).  The DnD rules (Advanced Dungeons and Dragons 2nd edition back then) were adapted to run real-time, but you could pause to think and plan, and that sure was a good idea early on.

So why Baldur’s Gate?  The immersion factor, for me, was great.  As you start out in the typical idyllic home life, getting taught the interface and talking to NPCs, you can also (if you are careful and listen) get some backstory from monks chanting throughout Candlekeep (the library/castle you start in).  I thought it was unique in that not every bit of story was just something you had to read in a text box (or get from talking to all these people directly, don’t they have anything better to do?).  It was easy to miss, but it added so much.

You really had a sense that, despite being a person of destiny, you were also just a kid who could easily get exploded into a shower of gibs if you weren’t careful.  You had to plan your actions, and you could pause the game at any time to do so.  It’s a game mechanic that has served Bioware well, all the way through their current ‘spiritual successor’ to the BG series, Dragon Age.  It introduces actual strategy into what you do, makes you think about where you should position your wizards and archers, who to pound first with your fighter, and so on.  You find yourself judging the likelihood of an ambush, watching your hitpoints carefully, and generally acting more like real adventurers than engines of destruction.  You DO get to the engine point at higher levels (mostly in BG2) but there is still a ton of challenge to be had.

I’ve gone on for 500 words here, but really, this is one of those ‘roots’ games.  If you want to know where modern computer and console RPG gaming came from, you need to start here.  DO IT.  Go for the eyes, Boo, go for the eyes!