SWEET! Today’s Woot is 4 discs packed with episodes of Mystery Science Theater 3000! Click here to see the full details. Here’s a sample from one of the ‘hits’ included, Future War. Skip ahead to 2:43 if you are impatient.

Gizmodo has the scoop on what could be the nerdiest wedding in the history of weddings. It is Star Wars themed, down to the Death Star disco ball, Stormtrooper bustier and the tables named for SW universe locations.

As you may have heard, Pepsi has release Pepsi Throwback and Mountain Dew Throwback, versions of the drinks that make use of natural sugar instead of High Fructose Corn Syrup. You can most likely find ’em now at your local mega-mart (/Alton Brown’d), and I just picked up the Dew Throwback up in our cafeteria at work.

The first thing I noticed when taking a swig was that it didn’t have that ‘burn’ to the same degree as regular ‘MtnDew’. The flavor shows through a bit more, and there seems to be less carbonation to me. The ‘finish’ is better, too, with no metallic tinge – just tastes like Dew.

The only downside is that (for now) this is a limited time deal for the summer.

I should be working on deep, well-researched posts for the Sabres early offseason, but I’m just getting cracked up over and over by this:

Here’s a head-scratch inducing addition to your desktop PC setup – an old VHS tape modded to act as a USB flash drive, complete with LED light and spinning reels. I don’t have the skills for this, but if I pass this along to the right person (MacGyver-esque dude in front of me) I can make this happen. Funny stuff. H/T to Make and Lifehacker.

The comic is chock full of stuff like this, but to delve a bit deeper, read this. Basically a detailed mathmatical analysis of a date in which you attempt to see the sun set twice. I did NOT study hard enough to deal with that…

Even if you survive (and that’s no guarantee yet from what I understand, as this guy did suffer some head trauma), there’s a good reason going over Niagara Falls is a bad idea:

The man had clothes on when he entered the water, but was naked when he was rescued.

Rescuers believe the force of the falls stripped him of his clothing.

My emphasis. A few other reasons it’s dumb:

The river’s temperature was just above freezing, and ice floes could be seen in the area, Smith said.

The Horseshoe Falls is 167 feet high and the pool of water beneath it is equally as deep. On average, about 1.5 million gallons of water flow over Niagara Falls every second.

I laughed at that a lot more than I should have, I think. Unfortunately, viewing that led to this showing up in the related vids. (mind scrubbing may be needed afterwards, beware) 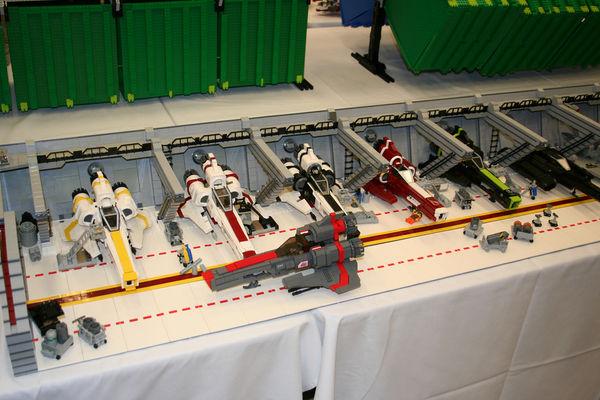 This is just a fraction of the 35 Vipers and other BSG-themed Lego creations shown off at ‘BrickCon‘ last year. Gizmodo has an in-depth gallery in their post on the matter, and now I want one of these. I wonder if any of these guys has a parts list or build out there…

Something a little different for you, after all the Bills/Sabres suckitude.

As most of you probably know, there’s a Woot-Off ongoing. Must…stay…awake…need gadgets… *snore*

For a change of pace, some bits from the Amherst Bee Police Blotter:

A bouncer was sent to St. Josephs Hospital after a fight at a George Urban Boulevard nightclub. A cell phone was found after the incident, and when the officer answered it after it rang, he was able to get the name and address of a suspect. The officer told the suspect he would return the phone if he provided his name and address. The suspect then offered the officer 2 grams of cocaine in exchange for the phone.

Police and the Ellicott Creek Fire Company responded to Brier Road where a womans hand was reportedly stuck in a blender. It was discovered that only her shirt was caught, and the fire crew cut her free. The banana bread was ruined.

The horror. I guess her shirt wouldn’t blend.

Police were called to Wickham Drive about a lost wallet that contained cash and credit cards. The wallet was found 20 minutes later under a bed and is believed to have been hidden by the basset hound.

The cash was missing, and the hound was found passed out in a pile of liquor bottles and Dog Fanciers magazines.

A man called from Maple Road to report an encounter he had with a raccoon the previous night. He said the raccoon challenged him.

Having lost to a small animal at HORSE, the man called the cops to see if the raccoon was roided up.