Hey, it’s been a while.  Vacations, children, car shopping, attending Sabres games in the press box, all take a toll on my time.  Onto the posts!

Bah, I’ll be impressed when the docking bay is built into a giant Death Star model.

100 facts about the Lord of the Rings movies, many of which you might know if you watched the movies with the DVD commentary on.  Neat for those of us who haven’t.

I just love glaciers, and science.

The Math that Saved Apollo 13 – this is cool.  I had JUST watched a show about Apollo 13 where you saw Lovell with this very manual.

Mimicking nature, always a solid option when you have a technical challenge like this.  These ‘kelp forest’ underwater power generators could possibly be adapter to work almost anywhere. 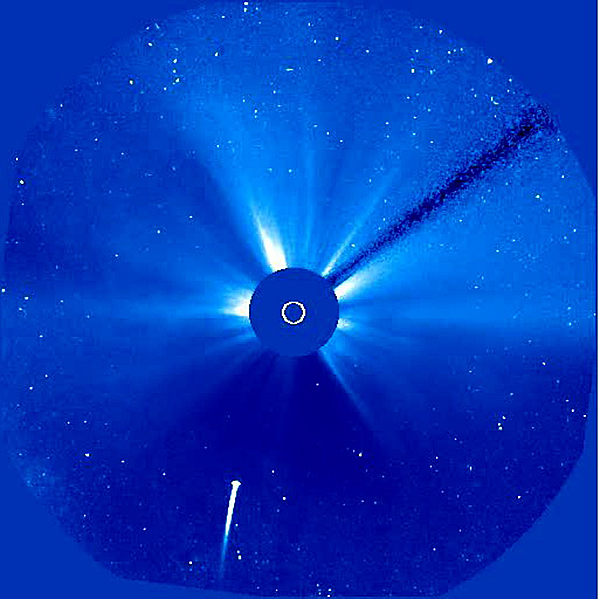 Really does sort of resemble the Silver Surfer.  It’s a comet, though.

I just got a new laptop (this Toshiba, if you are curious) and as such, have a blank slate for new software to install.  In case it’s helpful, here’s what I put on any new PC:

If you want more stuff, I can go deeper, but these are the apps that are must have for me.  Got any other suggestions?  Comment ’em.

Hey, everybody.  Haven’t been around much to post here, mostly because I haven’t seen any movies or played any new video games to review. ;)  That should change this weekend.  What I would like to do is highlight some of the newer additions to my blogroll and give some examples as to why you should be reading these sites.

These two gents are writers, whose collaboration via the pen name James S. A. Corey Leviathan Wakes is due out this summer.  I’ve read parts of it in other forms, and it’s awesome.  Their shared blog has the musings of two well-spoken men on a variety of topics, including racism and exoticism in sci-fi and fantasy novels.  Well worth a read for writers, or anyone who likes to know about others’ creative processes.

Shifting gears slightly, you have the blog of David “Nighthawk” Flor, a software dev and game designer I know.  He’s done mods for Half-Life, so if the name is familiar, you probably played The Opera (he mentions it here).  Nighthawk has a lot to say about game design, whether about how to handle insanity in DnD compared to Call of Cthulu, or creating random dice rolls for games hosted online.

I won’t pretend to know all that he’s talking about in regards to synthesizers and such, but Thomas Emmons is a composer in California who has a ton to say about music, computers and more.  Here’s a post about social networks and collaboration in the music scene.

Mike is a photographer and dad, which combine for some cute pictures of his son, Jason.  He also writes some insightful stuff over at Life as a Human.  I trust Mike’s book and movie reviews, though like me he doesn’t get to do them as much any more thanks to having children.  On the plus side, he’s reviewing more ‘kid’ movies which is relevant to my interests.

So that’s a taste of what my friends are up to.  Most of whom are more creative than me.  I might do this once in a while to highlight the good work they are doing.

As a follow-up to my review of the HTC Hero, the notable apps I have installed:

Now, for fun stuff. Games are spares for the Android platform, compared to the iPhone anyway, if only for the fact that you can’t yet store apps on the SD card without hacking. You can play Doom, which is cool if hard to control. There are plenty of time-wasters, like Bejeweled (and many clones), WordUp! (sort of like Boggle), and so on. For paid games, there’s a SimCity game available at HandMark, though I’d like to be able to try it first. Looks really cool though. One other thing – there’s a WordPress app (WPtoGo or some such), that is neat, even if you aren’t using it for creating new posts, it’s nice for quick spelling fixes or approving comments. Any other app questions, hit me up in the comments.

As you can probably tell, when I’m not watching hockey and football or playing with my kids, I like to tinker with my computer. I have come across several utilities recently (thanks mainly to Lifehacker and other geeks) and I thought I’d share them with you.

There you have it, a good start at the stuff I currently install on my Windows Vista machine to make it do what I want the way I want. I may follow up with more stuff, and if you have any questions or suggestions, comment away!

Drew McLellan has posted a very good run down of how to improve blog (and general website) performance. It covers caching, outsourcing of feeds, and using something like Amazon’s S3 to host large files, just as an example.

Heck, there are (amazingly enough) 24 different articles on the 24ways site that deal with all sorts of web design quirks. Very good stuff there, check it out.

Lots of neat new features from the sound of it, too. Hit up the GIMP web site for details, and to ooh and ahh at their new design.