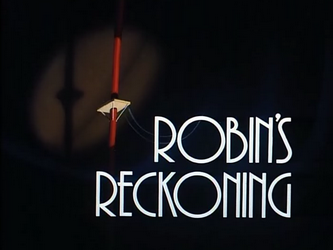 Batman: The Animated Series was an amazing show, and there are a bunch of episodes that frequently adorn “Top x B:TAS Episodes” lists.  Robin’s Reckoning (in two parts) often rates highly on those lists, and on the 24th anniversary of the primetime premier of part 1, I’d like to take a deeper look.

Viewing the series now, as an adult, one of my favorite things is how they dealt with Robin.  Rather than show him as a kid, he’s a young man, college age, who is beginning to grow out of the ‘sidekick’ role.  Dick has his own opinions and life on B:TAS, and it provides a complexity and depth to the Bruce/Dick relationship you hadn’t seen in the non-comic book Batman adaptations to that point.

This was never more apparent than with the two-part episode Robin’s Reckoning, which premiered in prime time on February 7th and 14th, 1993.  Batman and Robin are busting up an extortion ring, but things get weird when Batman gets the boss’s name and quickly sidelines Robin.  Alfred and Dick search the name (Billy Marin) and discover that it’s an alias for Tony Zucco, the man who killed Dick’s parents.  From here on, the remainder of the episodes intersperse scenes from the past showing Robin’s origin (adapted from Detective Comics 38) and both Bruce and an enraged Dick hunting Zucco separately.

Much like how Heart of Ice redefined Mr. Freeze for the modern era, Robin’s Reckoning brings a then-40 year old origin up to date.  Bruce takes in this damaged kid, but doesn’t just start training him to fight.  It only happens when Bruce, who had been distant from his young ward while hunting Zucco as Batman, realizes that Dick Grayson has the same drive to do SOMETHING about the injustices life has dealt him.  It’s less “hey, kid sidekicks sell, amirite?” and more “here’s a young man who needs to channel these feelings in a better direction”.  You could actually imagine a kid sidekick working like this (though I hope Robin got a few years of training in before hitting the streets).

The episode finishes with one of Robin’s best moments in the whole series.  Batman is hurting, but just before Zucco can finish him off, Dick bursts onto the scene on his motorcycle, grabs Zucco and drags him to the harbor, ready to drop him to his death.  Bruce tries to talk him down:

Batman:  Robin! That’s enough, Robin!  You can’t allow your personal feelings to guide your actions.
Robin:  Stuff you, Batman!  You and your stone-cold heart!  You don’t know how I feel!  How could you…?

In one of the best moments in the series, Bruce doesn’t answer.  Dick realizes what he’s said and let’s the police take Zucco.  It’s a surprisingly emotional moment for a “kid’s cartoon”, one of many that elevated Batman: The Animated Series above its contemporaries.  Which says a LOT considering there were quite a few good cartoons in the early 90s.  Strong direction from Dick Sebast, great writing from Randy Rogel (who also contributed heavily to the Animaniacs, including many of the memorable songs), and of course outstanding voicework from Kevin Conroy, Loren Lester and the rest of the cast.  If you haven’t seen B:TAS in a while, today’s a great day to revisit it by watching it on Amazon Prime.  If you need a 30-day trial for Prime, click here.