It’s not surprising in the least that the Vision would get a title in Marvel’s “All-New, All-Different

” lineup.  He made his big-screen debut in this summer’s Avengers: Age of Ultron after all.  When this sort of thing has happened before, you have often seen changes made to the comic book version of the character or characters involved, for better synergy.  Peter Parker develops organic web-shooters, or the X-Men wear leather costumes, what have you.  What writer Tom King, artist Gabriel Hernandez Walta, and colorist Jordie Bellaire created here is something VERY different, and it’s got me hooked from the jump.

If you need to know the basics about the comic book version of the Vision, he is a synthezoid, which is basically a synthetic human, who had originally been created by Ultron to infiltrate and destroy the Avengers.  He turned on Ultron and ended up joining them.  Vision’s emotional capabilities have changed numerous times, and currently he has his memories (more or less) but has purged the associated emotions from them.  I don’t think it means he’s purged ALL emotion however.

As you can guess from that history it would take a lot for things to get stranger for the Vision, but Vision #1 certainly does exactly that.  It seems that Viz has created a while family for himself and settled down to a ‘normal’ life in a DC suburb.  He’s doing liaison work for the Avengers to the White House.  His wife Virginia, and children Viv and Vin seem like a perfect simulacrum of a normal family…which is exactly why they are so darn creepy.  Add in the fact that it’s implied that Vision used the Scarlet Witch’s brain patterns to create Virginia – and who’s more stable than Wanda! – and combined his and hers to make the kids, and you fall straight into the Uncanny Valley.  The Visions’ blank eyes and 50’s style politeness are unsettling and as you read deeper it becomes clear that there are some serious problems with Vision’s plan. 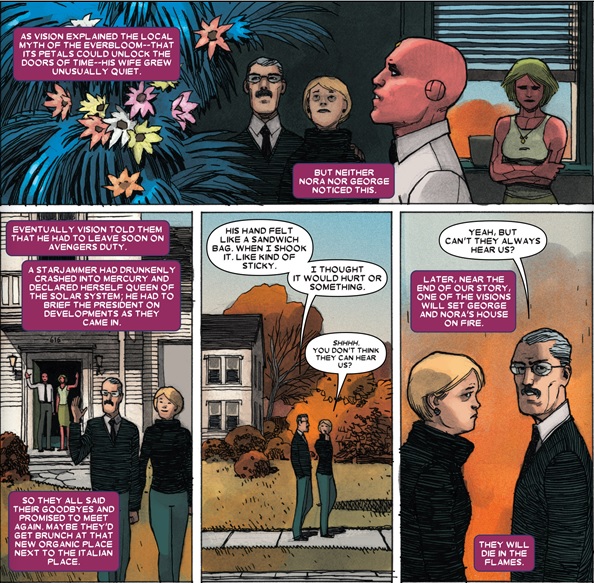 Punctuating the story and adding to the creepy tone are the captions, matter-of-factly describing both the mundane and the horrific.  As the story goes along, you begin to get a sense that the Vision family have the same sorts of problems we have – the kids don’t fit in at school, the mom is depressed, and Vision himself seems to be having a nightmare and doubting his ‘love’.

ny other super hero’s family, the Visions come under attack by a supervillain – who it is and why stems from Vision’s own creation, using the memories of Wonder Man.  The story ends with Virginia telling the children to lie to their father about what happens and yeah, when is issue 2 out?  I love when one of the big companies is willing to go experimental on us, and while I can’t see this being a long-running book, I HAVE to know what happens next.