The folks at GamesRadar threw down their list of the top 100 games of all time, and while I’m not going to comment on every game (I haven’t played all of them), I’d like to point out what I think they got right and what they missed.

WoW is on the list, but I’ve never been big on MMOs, if you are wondering about that.  I think they’ve done a solid job on the list, but there are some glaring omissions to my eyes.  In no particular order:

And with that, I’m sure I’ve missed some games.  What would you add?  Hate any of my choices?

Well, here it is.  The poll will run for a month, so you’ll have plenty of time to decide and vote.

Hope everybody had a great week.  I came home from Virginia Beach, and the weather followed me (in the 90s here in sunny Buffalo).  Of course, it’ll be in the 70s in a few days…anyway, here are last week’s posts:

Other things that caught my eye:

Bake your video card to fix it, which sounds really strange but it CAN work.

The Navy is testing a remotely controlled watercraft to patrol bases and harbors.  No weapons…YET.

A fascinating look at language, word sounds and the way the brain works.

Thanks to a mention of it at Dinosaur Comics, here’s a link to perfluorohexane, a molecule that can let you breathe liquid by adding oxygen to it.  The fact that it feels like you are drowning is a minor bump in the road.  In all seriousness, there are some great uses for it, including breathing help for premies, and treating the lungs of burn victims.  If you’ve seen the move The Abyss, you saw a real rat really doing this.

Via Gizmodo, from NASA,  an image of the Shuttle’s last landing, taken from the ISS: 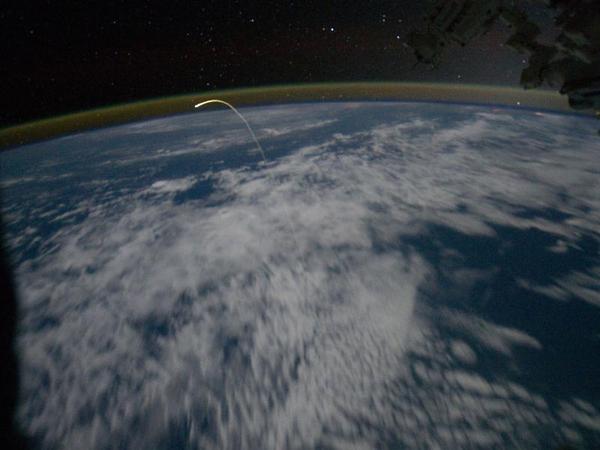 Since it began all those years ago with Star Wars (A New Hope), Lucas’s universe has spawned dozens of computer and console games of widely varying quality.  I’m very curious to see if we can come up with any sort of consensus of what the best Star Wars games are, and if one rises to the top.  Did you wear out your flight stick playing X-Wing?  Does your nostalgia lead you back to the green and red wireframe of the original arcade game?  Or are you an FPS guy, who things Jedi Outcast might be one of the best of that genre, Star Wars or not?  I didn’t even mention Super Star Wars series which I played the heck out of, or Knights of the Old Republic, so you can see the task at hand will not be hard.  What I want now are nominations.  Give me what YOU think the best Star Wars related game is, and WHY.  Either comment on this post or hit me up on the Twitters.

First, a confession:  I never played X-Wing vs. Tie Fighter.  This might wound my geek cred, but I just never got to it, and I had moved on to game styles than the flight sims of my youth.  I also was a bit nervous about a ‘multiplayer only’ game being fun since I didn’t know THAT many people that played computer games.

But this is not about XvT, but X-Wing.  Being a giant Star Wars fan, with Timothy Zahn’s Thrawn trilogy books fresh in my mind, X-Wing hit me at exactly the right time.  The fact that it was a fantastic (if extremely difficult, at least for me) game was icing on the cake.  I probably would’ve loved it no matter what.  X-Wing took you through a linear series of missions as a young pilot recruit for the Rebel Alliance.  It starts before the events of the original Star Wars trilogy, covering things like getting the Death Star plans to Princess Leia, and ends with you playing Luke Skywalker’s role in taking out the Death Star.

This game was hard.  I refuse to believe I was THAT bad at flight sims, as I tore through the Wing Commander series, Falcon, F-15 Strike Eagle and the like without struggling.  It speaks to how cool X-Wing was that I kept trying these missions over and over and over again until I finally got the satisfaction of beating them.  Tour of Duty 1 (there are 3) Mission 8 (12-14 in each ToD) in particular gave me nightmares.  I actually bought the strategy guide, something I never do.  Of course, the strat guide gave bad info on this mission but it helped on some others (Mission 10 was a bitch also).  I call X-Wing a two controller game – I broke 2 cheap flight sticks before I got a better quality one that could take getting slammed down in frustration. :)  There were some quirks in the game which you could use to your advantage, including a spin/roll move that could keep you from getting shot, but I felt that with the difficulty of the game, I’d use whatever advantage I could

The two expansion packs were excellent, and  included the mission walkthroughs if you needed them built in, no strat guide needed.  Certain version of the original game came with a novella that paralleled the missions, so you could get some back story as you advanced.  They really got a solid Star Wars feel in the game, and really, what kid didn’t want to pilot an X-Wing after seeing the movies?  If you can find a copy of the game, it’s well worth a play through, if only to remember the bygone era where the flight-sim was king.  The DOS version will be best played in DOSBox, though the game was updated a few times with various collections to better engines, including a Win95 compatible version.