This is mostly in response to the article over at Heroic Hollywood, Is Marvel’s ‘Agents of SHIELD’ Really Any Good? so maybe check that first.

There was no one more excited by the concept of Agents of SHIELD than me, when it was first announced.  A Whedon-adjacent look at the more mundane aspects of the Marvel Cinematic Universe, led by everyone’s favorite dead SHIELD agent?  Let’s roll!  The reality of the show has been, at times, middling however.  As Jon Negroni points out in the article above, rather than the show being must-see TV for Marvel movie fans, it’s mostly an afterthought.  The episode that tied in to Thor: The Dark World is the perfect metaphor for AoS, as the team were literally picking up the scraps left behind by one of the MCU’s movies.

Not that there hasn’t been some great stuff to enjoy along the way, but beyond the direct link to Captain America: The Winter Soldier, all that’s great about Agents of SHIELD is of their own making.  Brett Dalton’s Grant Ward bored us all to tears as generic SHIELD agent guy…until the HYDRA twist turned our understanding of him on it’s head.  The action directing has been a highlight also.  Really, the only thing that holds AoS back from being spoken of in the same breath as The Flash is the MCU.  The focus (more from the fans than anyone at ABC/Disney/Marvel) is on just how the show will tie-in to the upcoming movies.  “Hey look, Inhumans!” which is particularly rough since the Inhumans movie is now off the schedule, or Lorelei/Sif which is fun but not exactly something that’s going to grab the attention of the movie-goers or the casual TV viewer who sees the promos.

No, the biggest thing Agents of SHIELD could do to increase its quality is…stop worrying about the MCU!  There are signs of that this year, with the Robbie Reyes Ghost Rider being a focus, but they need to really lean in to it.  There are plenty of characters that will never get a movie or a TV show, and you already HAVE a show that needs to fill 20+ hours a year.  And has a tendency to have some filler episodes of questionable quality.  Wouldn’t it be great if, instead of sifting through the rubble of the next MCU movie, Coulson and May went on an adventure with Jimmy Woo and Ken Hale?  Or, instead of holding out hope we see another Kree, we see Fitz and Simmons have to figure out how to help defeat the Wrecking Crew?  The Hood.  Shang-Chi.  Moon Knight.  Tombstone.  The Grim Reaper.  Taskmaster.  Most of these characters wouldn’t carry a series on their own (okay, maaaybe Moon Knight) but would work great as a 3-8 episode arc on AoS.

There are signs that AoS may be going down this path this year, with Ghost Rider and some of the other mystical stuff.  The real trick is getting the audience back that may have lost interest.  Is there anyone you’d like to see on the show, or any TV-friendly storylines you’d like them to tackle?

And now for something completely different!  Although Power Man and Iron Fist does feature another character we first spotted the live-action MCU version of in Jessica Jones, Luke Cage, teaming back up with his old partner Iron Fist.  But don’t tell Luke that, it’s just a favor for a friend, and how well does that usually work out when you’re a superhero? 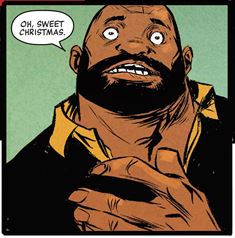 The first issue expertly straddles old and new – the plot focuses on Danny and Luke helping out their old Heroes for Hire office manager after she gets out of prison, but all is not what it appears.  We also see a bit of home life with Luke and Jessica Jones, such as the running gag about with Luke not swearing.  David Walker’s got the Luke/Danny banter down, and Sanford Greene’s art with Lee Loughridge’s colors invokes the 70’s era movies and shows that originally inspired the characters.  It’s no secret that Iron Fist is a personal favorite of mine, but this has inspired me to go back to the beginning in Marvel Unlimited to get the full details on what’s going on.  Definitely checking out issue 2.