Before you start this book, know that while it’s got Black Widow in the name, it’s both about her, and not exactly about her.  If it might bother you to discover the story is told mostly through the viewpoint of a teenaged girl that has an…interesting connection to Natasha, as some other reviewers seem to, just be aware.  Black Widow: Forever Red

(by Margaret Stohl) tells the story of Ana Orlova, a young girl rescued from the mastermind of the Red Room, the infamous organization that turned Natasha into the perfect assassin.  Nat promptly dumps the girl into SHIELD’s lap and jets, not being the mothering type.  Fast forward 8 years, and Ana is having strange dreams and that evil from the past roars back to put the whole world in danger.

Forever Red doesn’t break a ton of new ground, being a fairly standard YA novel, just in this case, it’s set in the Marvel Cinematic Universe.  And yes, it’s the MCU, as they specifically mention events like the Battle of New York, and has Coulson as SHIELD director.  There’s also an extended appearance from Tony Stark.  There’s a good balance between the weirdness of the MCU and the more grounded aspects Natasha typically deals with.  I enjoy the interplay between Ana and Nat as their similarities get the better of the older woman (in a “when you get older I hope you have a daughter just like you!” sort of way).  The action moves at a fair clip most of the time, and the story has just enough twists to make you second guess some things.

Forever Red is a worthwhile read, especially for the MCU fan who isn’t up on the comics and wants to know how a spy/assassin gets the skills to team up with gods and monsters and not die.  Preview below:

The best description I’ve seen for this new Black Widow

comic is it’s the cold open to a new James Bond movie, but starring our favorite super-spy.  It’s pure action.  Seriously all we learn is, Widow steals *something* from SHIELD and busts out of a helicarrier.  That’s all we know, but it’s A-OK because that means we get twenty pages of Natasha being a badass.  That might seem thin, except this is the same team of Chris Samnee and Mark Waid (colors from Matthew Wilson) that just straight killed it on Daredevil (seriously, I just read them and I may be talking about that soon) so they’ve got a long leash.  For now, we get to bask in the beautiful art and try and figure out of Nat is really on the outs with SHIELD or if there’s another game happening.  If you need more Widow in your life, check out volume one of her last series 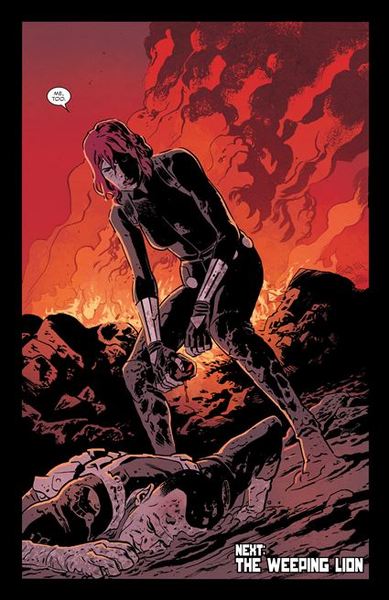