I have some catching up to do, so you get some quick thoughts on some recent flicks.

Avengers: Age of Ultron – The first movie was so successful, so it would’ve been difficult to meet expectations here. Ultron definitely was a half-step down but still had some great action and humor. Ultron himself could’ve used a bit more menace – something Spader would’ve been capable of, and in the end Ultron comes off a bit odd. I loved the Vision though, and for all the worry about Quicksilver and the comparison to the X-Men movie version, he and Wanda were great in their limited role. Special shout-out to Hawkeye who filled the ‘heart of the team’ role admirably, and was probably the funniest of the Avengers.

Ant-Man – Okay, I really enjoyed Ant-Man. Thought of as the riskiest project in the MCU after Guardians of the Galaxy, especially with all the turmoil surrounding Edgar Wright’s departure. It didn’t catch fire like Guardians but has performed solidly, tracking to match or exceed Captain America: The First Avenger. The visuals were a ton of fun and seemed to keep some of the Edgar Wright weirdness around. I wish Hope could’ve been Wasp here but I’ll deal as long as they get her in for future MCU movies. I also hope we get to see more Hank Pym – I’d love to see Michael Douglas as Hank going toe to toe with Tony Stark.

Minions – Minions is the classic example of something that is funny in small bursts but drags when expanded out to feature-length. Like how Pinky and the Brain were funny on Animaniacs but significantly less so with their own 30 minute show. There were a few chuckles and it certainly wasn’t so bad as to be painful, but it’s telling that the biggest smile for me came from when (spoiler alert) young Gru appeared at the end. Catch it when it’s on FX or whatever.

Casting news came down this week that Michael Douglas had signed on to play original Ant-Man Hank Pym in Edgar Wright’s Ant-Man, due out in 2015.  However, this came on the heels of Paul Rudd signing on to play Ant-Man…so who is it going to be?  Both, if they do it right. 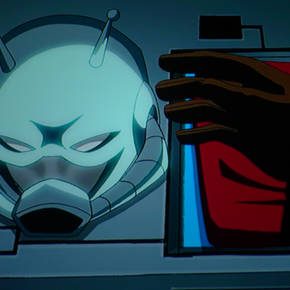 Like many hero identities over the years, the Ant-Man name has been held by a few different people, with Hank Pym and Scott Lang being two of them.  Pym created the technology to change his size, as well as the snazzy helmet you see to the right that allows him to control ants (and other closely related insects).  He fought alongside the Avengers, but after a while it got to him.  Hank was a scientist first, and after some setbacks he puts aside costumed crimefighting and rededicated himself to research.  That’s where the second Ant-Man comes in.  Scott Lang steals the Ant-Man gear in order to rob banks.  The reason why has varied in media portrayals, but it usually involves saving his daughter in some way (on Earth’s Mightiest Heroes, which Edgar Wright watched for ‘Homework’ and is the source of this picture, Cassandra Lang had been kidnapped by a mob boss).

So where does that leave the movie?  Considering Michael Douglas’s age, the prevailing thought is he’s going to be a retired hero, possibly a SHIELD agent considering the group’s importance in the Marvel Cinematic Universe.  We know from The Incredible Hulk movie that research into new heroes continued long after Captain America was lost – it makes sense that we would’ve had a few active in the 60s or 70s.  Maybe we’ll see a young Fury, or an older Sharon Carter kicking some Cold War ass in a flashback.  Then, fast forward to the present day, where we have Scott Lang stealing the Ant-Man gear.  The Scott Lang story fits with Edgar Wright describing the movie as a ‘heist’ picture.

Changes are going to happen, when moving a character from comics to the big screen.  Many are wondering about Janet Van Dyne, Hank’s girlfriend/wife/ex-wife (it’s a comic book, it’s complicated).  Will she be in this at all?  She’s an Avenger too, as Wasp.  I can’t imagine them NOT wanting an attractive young woman in the movie – it’s Hollywood – but it remains to be seen if they have Janet involved.  I’ve seen Rashida Jones mentioned for the character, and I think she’s got a great look for Janet (see the comparison below).  Let me know if you have any questions, or comment below! 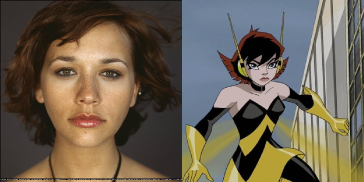