I’ve heard a lot of good things about Carrie Vaughn from friends who read her Kitty Norville series, so when NetGalley had a copy of her new book, Martians Abroad, available to read, I jumped at it.  I’m glad I did, though the book is not without it’s faults.

The story takes place in a future timeline where Earth has settled the moon, Mars, and has stations and colonies out in the belt and on the usual moons.  Sort of like the Expanse, but less grim.  Polly Newton and her brother, Charles, are the kids of the main Martian colony leader.  Polly wants nothing more than to learn to be a pilot, but her mother has other plans – she manipulates their way into the Galileo academy, a prestigious Earth-based school for the best and the brightest.  Off-worlders usually don’t attend, not only for the physical limitations (with most growing up in 1/3 to 1/6 Earth gravity), but for the fact that the school is basically a networking tool for all the elite rich kids of Earth.  Polly is furious, but her brother Charles (an odd hacker who isn’t against a bit of manipulation himself) convinces her to give it a try as attending may give them some advantages in life.

From there, it plays out not unlike the usual YA novel where the outsiders struggle to fit in.  The Earth folks look down on them, the head of the school doubts them, but it’s a series of strange accidents where Polly has to be a hero that really throw them for a loop.

Martians Abroad is well-written and keeps things moving at a decent pace.  The main downside for me was, it seemed to take quite a long time (more than half of the book) for the mystery to really take hold, and even then, it didn’t stand out that the bad things happening were all that out of the ordinary.  Still, it was an interesting, YA-friendly take on future kids doing dangerous stuff in space and if any of that sounds appealing, or you’re already a Carrie Vaughn fan, it’s worth checking out.  You can pre-order at the link, the current release date is January 17, 2017.

I’ve been a big booster of The Expanse books for a long time (note that I’ve been acquainted with one half of the author team that makes up James S. A. Corey since I’ve been on the internet), but I haven’t yet reviewed the TV show.  Hey, I’m a busy guy, and there’s a lot of media out there, but I need to get this out there:  you should be watching The Expanse.  It’s a big-budget science fiction TV show done about as right as you can do it.

First, the facts of the show/books in case you don’t know them.  It’s set 200 years in the future.  An efficient drive was invented to push ships around the solar system, so humanity has spread to the Moon, Mars and to the asteroid belt and beyond.  Mars broke away from Earth (now run by the UN) and has formed its own Republic.  Both rely on the materials mined out in the belt.  The people of the belt do the exceedingly hard and dangerous work but chafe under the leadership of the planets ‘down the well’ (as in, the gravity well of the sun).  The OPA, or Outer Planets Alliance, is akin to the Irish Republican Army.  There are political aspects, people who simply want to get the outer planets recognized as free, but a lot of terrorists as well.

Let’s break down the components of the show that are making it must-see TV.  First, space looks amazing and real.  The real sets mix seamlessly with the needed CGI to produce ships and stations with a real heft to them.  Whether it’s a run-down ice hauler or the latest Martian battleship, it all feels real – and like a natural progression of tech from now to then. 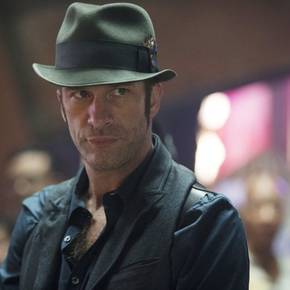 But maybe spaceship battles aren’t your thing?  Let me introduce you to Thomas Jane’s Detective Miller.  He’s a classic noir detective.  He’s seen everything, and straddles the line of corruption, much to his Earther partner’s chagrin.  He gets an interesting side job from his boss – find a missing rich girl who’s gone native with the OPA, and kidnap her home to her parents.  How Julie Mao ties into the struggle between the inner and outer planets is core to the show.

On the other side of things, you get Jim Holden and the crew of the ice hauler Canterbury.  Holden is content to live out his days with little authority and a steady job until circumstances throw him and his crew into the middle of a conspiracy that threatens to take that UN/Mars cold war and make it a hot one.

If Firefly was your thing, Holden and the crew are what you need.  They are the exact sort of misfits that end up working on an ice hauler out past the belt.  Everyone is either hiding from something, leaving something behind, or looking for something.  The Expanse isn’t rushing the reveals either – everybody fit neatly into a role, Naomi the engineer, Alex the pilot, Amos as the muscle – but the hints and teases of their backgrounds (filled out over more than a half-dozen books, novellas and short stories) are working their way in slowly.

Maybe you are interested in the politics of a world like this, well, they’ve got you covered too.  Shohreh Aghdashloo plays Chrisjen Avarsala, a UN Deputy Undersecretary who is a master and the push-and-pull world of politics.  She uses her intelligence and cultivation of relationships to work over whoever gets in her way in protecting Earth’s interests.  She’s a fan favorite character from the books, and Shohreh and the writers have done an amazing job bringing Avarsala to life.

I feel like I could dedicate pages to every character, whether it’s Chad Coleman’s Fred Johnson (former military man now firmly on the OPA’s side), or Anderson Dawes, the OPA heavy that is the main thorn in Miller’s side on Ceres station.  The showrunners, casting director and writers (which includes the writers of the books by the way) have done a superb job of fleshing out the world.

Convinced?  Still on the fence?  The first five episodes can be streamed via SyFy.com which also has some cool interactive material to go with them.  After those five, you have to sign in with your TV provider’s account, or you can always purchase The Expanse‘s first season via Amazon.

Hey everybody, hope you had a good week.  I was busy being productive at work (and moving to another building) so the links are light.  Here are this week’s posts:

A beautiful new day, seen from space.  And oh yeah – it happens 18 times a day for them.

You’ve all heard about the neutrinos by now, probably.  I’m still thinking there’s a problem with their calculations or equipment, but if not, big changes to our understanding of the universe.

Scientists in Spain discovered a cloaking device (for magnetic fields).  Where would scientists get names for stuff if not for Sci-Fi books and shows?

I mentioned this mission back when it started, and now it is nearing completion (you may need a New Scientist login to view that article).  What I’m talking about is Mars 500, an experiment to test the psychological stresses of long-term spaceflight, such as what would be required on a trip to the Red Planet.

the “spacecraft”: a set of interconnected cylindrical modules. The windowless chambers are locked and soundproofed, with air and water piped in. The six volunteers inside eat only what they brought and what they can grow.

They also simulate the communication delays, with messages taking an appropriate amount of time to reach them, so they have to solve problems on their own.  It’s neat stuff.  I wonder if that French guy’s guitar survived the ‘trip’, though.

There is a simulation going on in Russia right now, with a team of  ‘astronauts’ living in a series of modules designed to resemble a ship flying to Mars.  They are stuck together in there for 520 days, about how long it would take to fly to Mars, to test whether 6 random scientists could stay level-headed and relaxed after all that time.  This line, though, kills me:

“Well aware of this hazard, crew members equipped themselves accordingly. For instance, French participant Romain Charles said he was bringing along a guitar so he could entertain the other team members.”

I’m SURE that’s what I’d want if I was locked in a spaceship with a bunch of other dudes for a year and a half, and one of them is a French guy with a guitar.  I sure hope the rest of them have some noise isolating headphones.