Yes, another Koei game, actually I will cover the whole series of games, at least the ones I’ve played.  Romance of the Three Kingdoms games are at their core turn based strategy games centered around the eponymous timeframe in Chinese history.  You’ll remember that from my talk about Destiny of an Emperor.  There have been eleven games in this series (though not all made it to the states I believe), on platforms ranging from the NES, PC, Amiga on up to the Wii.  At their core, the games are basically the same:  you are building up your territory both economically and militarily, gather troops and generals to your banner, and waging war against your enemies.

I played I on my NES, but my favorite versions were IV and X.  IV, playable on SNES and PC (win 3.1!) was a great example of what the earlier games were like.  You had to improve your territories by repairing dams, improving farms for food, and had to balance increasing the size of your army with not stifling population growth.  Battles could take several forms, with field battles (where your advisor could set traps of pitfalls or bales of hay to set fire to), duels (where a powerful general could take out an enemy army in one fell swoop) and gate battles where enemies could try and bash your gate in and take the city.  That was another thing you had to build up and improve.  While not for everyone, the strategy was deep and satisfying for me, trying to find the right balance of domestic and militaristic improvement.

ROTK X, played on my PS2, was at it’s core the same style of game, with one big difference – it was played ONLY from the perspective of one single general, who could be the ruler of a territory, a vassal of another ruler, or just a masterless warrior wandering across China.  As an example, I played as Zhao Yun, one of the Five Tiger Generals of Liu Bei but at the beginning of the earlier scenarios, a free general.  You can improve your standing in the world by taking tasks to improve whatever city you are in, in the hopes of being recruited by one of the rulers.  I eventually caught on with Liu Bei, and at that point you get your tasks from your ruler.  You are still being tasked to improve various holdings or train troops, with the added benefit of getting to fight in the great wars.  I did well, and was left in charge of a city of my own.  As you advance like that, you get more and more freedom to act.  I eventually conquered all of China for Liu Bei, with he and some other generals gaining a few territories without me, but then Liu Bei died, leaving his son in charge.  Liu Shan, being distrustful of how much power I had, banished me, though part of the empire rebelled and came with me.  It’s a very realistic event for the time period, and played out very cool.

There is zero appeal here to folks who prefer games like Dynasty Warriors, but if you like strategy games, or city-building games, check it out. ROTX X

This might be surprising, considering how much I love most other Sid Meier games, but I never got around to the original Pirates! game.  I was deep into war games and looking at it, it just didn’t interest me.  Another thing I found to be cool were Samurai (and by extension, ancient Japan), which led me to Koei’s games, such as Nobunga’s Ambition and Genghis Khan.  Young me enjoyed them, even though I didn’t have the tactical and resource-managing skills yet to do well. 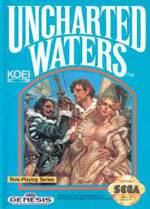 All of which led me to Uncharted Waters.  I always rented whatever Koei games came out, mostly because I couldn’t afford to purchase too many games.  This one looked cool enough inthe store to buy outright, and it was a great choice.  The story goes like this:  you are the son of a Portuguese explorer whose family is going through tough times.  You have one tiny ship and some goods to sell, and you have to build up your fleet from there.  Once you get going, there’s a bunch of different ways to advance – trading goods (with an economic model that changes the prices based on how much bought and sold in certain ports), privateering (for any of the three nations represented), exploration (people will ask you to search for things) and of course, piracy.  There is a plot, advanced by doing the odd jobs that merchants ask you to do, which you hear about in the bars.  Once you gather mates to your side, you can add ships to your fleet, up to 5 in total.  Your sailing and combat skills (for you and the mates) improve with use, and there are quite a few options for customizing ships.  You can begin with bare hulls, pick the type of wood, how many cannons and crew berthing spaces, and so on.  You can specialize ships for trading/exploring by cutting back on crew and guns, but that leaves you vulnerable to pirates.  Conversely, go too far the other way and you can dominate any fight, but not actually be able to carry your captured booty.

The nice thing about Uncharted Waters was the openness.  There’s a storyline to follow, but if you’d rather wander around blowing up Spaniards, exploring the whole world, and make crazy money, you can do that no problem.  Oh, and I forgot romancing a princess.  The game is widely available via emulation, for NES, SNES and Genesis, as well as a PC version (which I’ve never tried).  The NES version is what I had, and I actually prefer that (despite the lackluster graphics compared to the SNES) because the SNES version added random people walking around the towns who serve no purpose but to get in your way.

These games were even more popular in Japan, with multiple sequels and even an MMO game (which they keep saying will end up here,  and at least had been in closed beta testing at one point).  I’ve played the sequel a little but never got to deep into it.  Let me know if you’ve tried Uncharted Waters and if so, what you think!