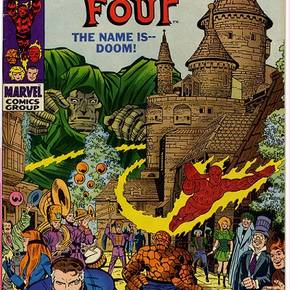 I finally broke down and watched last year’s Fantastic Four

debacle.  It’s terrible, joyless and soulless in a way no movie with “Fantastic” in the title should be, let alone anything with Stan Lee and Jack Kirby in the DNA.  You can’t blame the actors here – we know every one of them can act.  It’s practically a who’s who of rising young stars and solid character actors for support.  Here’s just a few of the things that stood out to me after one viewing of this cinematic atrocity:

Okay, I’m stopping at 5 so I’m not here complaining all night.  Obviously this is a deeply flawed movie even without considering the source material (possibly due to Fox’s interference), but I feel like the Fantastic Four can be done right.  The first thing I’d do is NOT make another movie.  Instead, do a TV show.  I’m not sure what the rights are for that, but I feel like a major problem with the latest movie especially is the filmmakers trying to wedge in all of this world-building and character introductions and backstory, and pushing action and fun to the bottom of the list.  A 9-13 episode season (similar to The Expanse or Legends of Tomorrow, even Daredevil or Jessica Jones) gives you time to get to know everybody, while not forgetting about great action set-pieces and humor.

Still, Fox may not be able to do a show, but there’s still a way to make a movie that can do justice to Marvel’s First Family.

Above all, whoever gets the next crack at the Fantastic Four needs to remember that this is supposed to be FUN.  They EXPLORE the unknown.  They have cool powers.  They fight monsters and forces of cosmic undoing.  And they love each other.  Show me that, and I’ll be a happy fan.