I’ve been a Marvel guy since I first read my brother’s few remaining comics (the ones my Mom hadn’t tossed, that old story), but Captain America never appealed to me.  The costume seemed like a bit much, and he just didn’t seem to be as much fun as Iron Man or Spidey, and didn’t have the way-out nutso stuff that was happening in the pages of the Silver Surfer.  I’ve come to enjoy Cap as an adult, devouring Ed Brubaker’s run on the Captain America book, including the story adapted loosely in the latest movie, The Winter Soldier.  There will be spoilers from here on out, so for those of you not continuing on, I loved this movie a TON. 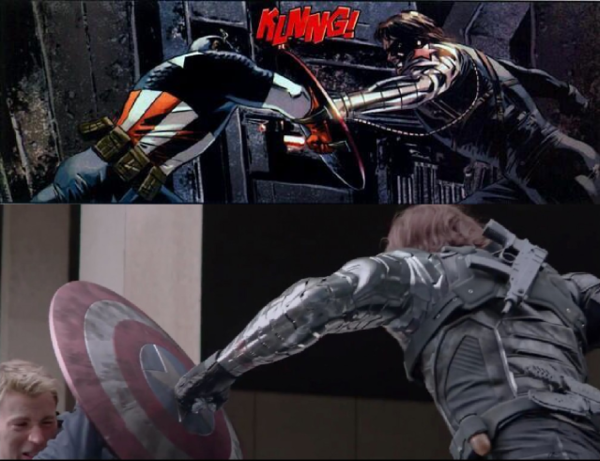 The movie starts with a ‘Meet Bro’ scene between Steve Rogers and Sam Wilson, an Iraq vet.  They bond over stories of too-soft beds and lost friends.  Cap gets called away on a mission, where Batroc the Leaper (ze LEAPER!) has taken a SHIELD ship used as a satellite launch platform.  It’s a great action scene, I absolutely loved how acrobatic yet powerful Cap was.  GSP could actually do some ‘leaping’ and actually got a few shots in on our hero.  But why was the ship out there?  Why was Agent Sitwell on it?  And what intel was the Black Widow taking from it?  Cap has those questions, and Nick Fury isn’t answering.  He has trust issues, moreso after he can’t decrypt the data stolen, despite it apparently being locked down…by him.  He heads out to meet Maria Hill, but is ambushed by assassins on the way.  His car gets blown up by the Winter Soldier, but he escapes.  Fury goes to Steve’s apartment, broken and bleeding, and gives him the flash drive with the encrypted data.  He gets shot by a sniper – the Winter Soldier! – and Steve takes off after him, with Agent 13 being revealed as Steve’s neighbor.  The Winter Soldier escapes, after the shield-slinging scene all over the trailers.  Fury is taken to the hospital, where he succumbs to his injuries. (right)

SHIELD exec Alexander Pierce (Robert Redford) asks Steve about why Fury was in his apartment, and what he told him.  When he declines, he has his strike team attempt to capture Rogers – which goes as well as you’d expect.  That’s the elevator fight.  Cap meets up with Natasha and they go to a location they found when trying to decrypt the flash drive – Camp Lehigh, where Rogers was training when he became Captain America.  There is a hidden SHIELD base hidden under it now, and within it, old computers.  It’s all very strange until they fire up and you see…Dr. Zola!  He, along with other German scientists, were enlisted to help SHIELD after the war was over (much like what happened in real life), but Zola was secretly still working against them from the inside, placing agents loyal to HYDRA in key places.  When he knew he was going to die, he had his consciousness transferred to a computer to live on.  No crazy robot body, but they may have wanted to avoid that with Ultron being the next Avengers villain.  SHIELD (the bad ones) try to blow up the bunker with a missile but Steve and Nat survive.

Not knowing who else to trust, they head to Sam Wilson’s house, and he wants to help Cap figure out what’s going on.  After grabbing Sam’s Falcon wings, they find Jasper Sitwell, and he spills it after getting thrown off the roof – Zola created a program to sift all of your personal data to determine if you are going to be a threat to HYDRA’s version of order, and will use satellite guided munitions from three new heavily armed helicarriers to blast potential troublemakers (like Tony Stark and Dr, Strange) to bits.  It’s a terrifying vision of the future.  They head out to the Triskellion (SHIELD HQ) but are taken out by the Winter Soldier on the way.  Cap and the Winter Soldier fight, and Steve is horrified when he knocks the Winter Soldier’s mask off…and sees Bucky’s face.  Buck doesn’t recognize him, and they are captured by HYDRA/SHIELD.

But Maria Hill to the rescue!  She’s disguised as one of the SHIELD agents that puts them in a truck, and they slip out when it stops.  They head to another secret hideout, and discover NICK FURY IS ALIVE??? and planning how to stop Pierce’s plan.  They namecheck Bruce Banner as having developed a drug to try and slow his metabolism down as what Fury used, which was a neat reference.  The team has to hit each of the three helicarriers and swap in a device that will decouple them from the satellites (which are targeting hundreds of thousands of people on the ground).  Two carriers get switched, but on the third is the Winter Soldier.  Steve tries to refresh his memory, but it seems to be for naught.  Meanwhile, Natasha snuck in to SHIELD HQ disguised as a member of the Security Council, and they put all of SHIELD/HYDRA’s secrets online.  There’s a struggle, and Fury shoots Pierce, who gets out a final ‘Hail HYDRA’ before dying.  A badly hurt Captain America gets the third helicarrier under their control, and Hill uses the weapons on each one to blast the others out of the sky.  He falls into the Potomac…but Bucky drags him out before leaving.

There’s more, but seriously, that should be enough to get you off the couch.  I loved everything about the movie.  The fight scenes were dynamic, with great use of the shield by Cap.  Natasha’s gadgets come into play, and Anthony Mackie is just so darn likable as the Falcon that I want to see him in every movie Captain America is in.  I wish more could’ve been done with Agent 13, but something probably had to be kept out to keep it under 2.5 hours.  Robert Redford was a bit understated as Pierce, but it kind of worked – he was Fury’s nemesis at the end, not Steve’s.  The Zola reveal was fantastic.  Sebastian Stan was suitably frightening as the Winter Soldier, and looked great.  The final post-credits scene shows Barnes checking out his exhibit at the Smithsonian, remembering, perhaps, something of his past life.

There’s a lot of serious stuff to think on here – even though the Russos stated the NSA scandal wasn’t blowing up until after production had started, this movie says a lot about freedom versus privacy.  HYDRA was playing a slow game, sowing chaos in the world, so that when they came to ‘secure’ the world, no one would stand up to them.  It’s pretty chilling.  There are a lot of Easter eggs for movie and comics fans, such as Garry Shandling’s senator reappearing, and Dr. Strange getting mentioned again.  We meet Baron von Strucker mid-credits, along with Quicksilver and the Scarlet Witch.  They have Loki’s scepter, so you know nothing good is coming (though what that’s going to have to do with Ultron will be interesting to see).  I’m dying to see the rest of Agents of SHIELD now – are any of our team the HYDRA plants?  Will Fury contact them?  It makes sense now why they were set loose to operate more or less on their own.  The movie worked well on so many levels.  Just a blast, and I’m going to have to find my way to it again.