Where to begin. I could tell you that Wool is about humans eking out an existence in underground silos, but that’s just a frame – a common one in fiction, from City of Ember to the Fallout games, it’s been done. No, what this series of tales is about is people, psychological manipulation, mob mentality, and what happens when good people find out they’ve been lied to for a nebulous greater good they don’t agree with. Post-apocalyptic dystopia books aren’t normally something I seek out, but you can’t beat this one. This is actually 5 novellas in one collection, but they tell a complete story, each one peeling back another layer of the mystery. Highly recommended.

and for Kindle:  Wool Omnibus 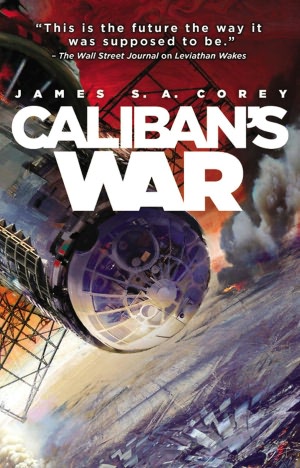 Caliban’s War, the second book in James S. A. Corey’s “The Expanse” series, begins with a bang.  Ganymede, the moon of Jupiter, is the breadbasket of the outer planets, producing the food needed in all the asteroids and ships out that far.  Mars and Earth both have domes on the moon, and with the uneasy truce, the Marines on both sides settle into a routine of patrols. Patrols made more ridiculous by the fact that any war would typically involve smashing the domes from orbit.  When Martian Marine Bobbie Draper witnesses…something ravage the opposing UN Marine patrol and then do the same to hers, well, that’s when it really hits the fan.  Is it related to whatever the alien protomolecule is growing on Venus?  Or something worse?  And what does it have to do with a bunch of children that went missing before the attack?

I LOVE this book.  Caliban’s War moves at a breakneck pace, through the same claustrophobic and dangerous world of realistic space travel.  This time, though, instead of mixing noir detective intrigue in with kickass space opera, you have a peek into the politics and pressures that have so far kept Mars, Earth, and the Outer Planets from self-destructing.  It’s an interesting change, and that’s coming from a guy that would rather jam ice picks in his ears than listen to politicians speak.  Two female viewpoint characters (the previously mentioned Marine, Gunnery Sergeant Draper, is one) mix things up a bit.

I’ve evangelized about The Expanse series before, and this book lives up to even my expectations.  The figurative bomb dropped in the last line has me DYING for the next one in the series.  CHECK IT OUT already.

If you’re like I was when reading the early reviews, this one might frustrate you, because I’m going to try not to spoil things too badly.  It’s not going to be easy, though, as Redshirts is not like most sci-fi books you might read.  You’re going to make assumptions about this book, John Scalzi’s latest, based on the cover and title, some of which would be correct.  It’s about ‘Redshirts’, the disposable ensign that gets killed on away missions instead of Captain Kirk or Spock or whoever.  Many shows have them, and no, they don’t always have a red shirt, but we all know how to spot them.

In fact, you could make a fun genre romp that just turns that trope on it’s head – what if the Redshirts figured out they were cannon fodder?  What do they do?  There’s some of that, here, but it goes a lot deeper than that.  It gets freaking meta, man.  There’s…well, here’s where I run into the “don’t spoil it, asshole” part.  Hmm.  Instead of giving it away, let me just ask you this:  If you think a combination of Star Trek, Stranger Than Fiction, and The Matrix would be interesting, with characters who are snappy smartasses, and a set of three codas that twist your perspective around on itself a few times, check this out.  Just do it before a Borgovian land worm eats your brain.

Buy this at Amazon or B&N.

The King’s Blood is the second book in Daniel Abraham’s “The Dagger and the Coin” series, and I’ve been looking forward to this since finishing the first book, The Dragon’s Path.  Abraham has built an interesting world around the 13 races of humanoids left behind after the rule of dragons had ended.  What drew me in, and has kept me going through this second book, is how the rather mundane heroes can make choices with far-reaching effects.  Above all of the squabbles and infighting among the Severed Throne and other kingdoms (and the politicking within) is the return of a long-forgotten cult bent on taking over the world.  Sounds like pretty standard fantasy fare, yes, but the difference is the characters.  Much like George RR Martin’s A Song of Ice and Fire series, each chapter is seen from the viewpoint of one of a few different characters.  So far, the number of viewpoints hasn’t gotten out of hand, especially when you include a main character death or two.  I’ve grown rather fond of these characters, especially Marcus Wester and Yardem Hane (big happenings there!) and Cithrin, Magistra of the Medean bank in Porte Oliva.  Clara Kalliam comes into her own, but I’m left wanting more Master Kit.  He’s going to figure huge in the next book, so I’m really looking forward to that.

One improvement from The Dragon’s Path is in the character Geder Palliako, who started out as a boring, unimportant minor noble and has ended up as something much more – a pawn of the Spider goddess who wants to eat the world.  There is one time in The King’s Blood where I thought Geder might smarten up for the love of a woman, and realize just what was happening, but no, he can’t shake his horrible choices, and remains basically oblivious.  It’s great.  There’s no big mustache-twirling villain, just people doing what people do, and leaving carnage in their wake.

If you love the A Song of Ice and Fire series, whether on HBO or in print, I can’t recommend this enough.  It also helps that Daniel seems to write one heck of a lot faster than GRRM.  Heh.

If you want to purchase these books, consider using these links (which help me keep the site rolling):

I’ve had some Scalzi on my to-read list at Goodreads for a while, but just hadn’t gotten to it.  When I saw this pop up, though, I was thoroughly intrigued.  As a Star Trek fan, the references to the Original Series are obvious and numerous – we’re just seeing it from the ‘redshirts’ side of things.  Where it gets wierd, though, is that it becomes clear that these red-shirted Ensigns are somehow being compelled to do these remarkably stupid things.  They’ve gone to school for years to learn science, but when it comes time to analyze the sample that the Captain gives you, it takes exactly the amount of time that the plot seems to require.  But the rest of the time, the world seems normal and real.

So what’s happening?  We’ll have to find out when the book hits the shelves (or your favorite eBook reader) in June.  For now, you can read the first 4 chapters for free via your Kindle or Nook, or on the Tor Forge site.  If you like the excerpt and would like to buy the book, you can order it via either Amazon or Barnes and Noble, with these links helping me keep this place running.